Are you planning a holiday in Genoa and are looking for more information about the majestic Royal Palace, its history, exhibitions and guided tours?

If you don’t know me yet, let me introduce myself, I’m Andrea from Discover Genoa (and lover of my city), and in this post I’ll tell you everything you need to know about Palazzo Reale Genova.

Are you ready for this? Let’s get started!

Royal Palace of Genoa (Palazzo Reale): everything you need to know

The history of the Royal Palace

Palazzo Balbi, called Reale, is one of the 42 palaces of the Rolli of Genoa included in the list of UNESCO World Heritage Sites.

The Palace was built in the 17th century by the Balbi family, then sold to the Durazzo family, then to the Savoia family (the Royal name comes from here) and finally to the state in the early 20th century.

Let’s look at the history of the palace through the different historical eras together.

The Balbi, a family of humble origins from the Ligurian hinterland, made their fortune thanks to the silk and fabric trade, before moving on to finance.

This last activity determined their entry into the Genoese aristocracy, crowned by the construction of the Royal Palace.

The untimely death of Stefano and Giovanni Battista Balbi during the 1657 plague ended the first phase of work on the palace, which was sold to the Durazzo family.

In the second half of the seventeenth century, the palace was bought by the Durazzo family, descendants of a family who fled from the city of the same name in Albania, who, after living as slaves in Messina, were freed and moved to Genoa, where they became merchants.

After about two centuries from their move to the Ligurian capital, they reached the Doge’s Palace with Giacomo Grimaldi Durazzo, and established themselves as one of the most important families in Genoa.

They bought the Royal Palace for 42,000 scudi and decided to enlarge it by transforming the then gallery into a gallery of mirrors, modifying the portal, the atrium and the staircases and adding the courtyard and the hanging garden overlooking via Prè.

In these years, the Palace hosted illustrious people such as the King of Spain Philip IV, the Emperor Joseph II of Habsburg Lorraine, Joachim Murat, his wife Carolina Bonaparte and his brother Napoleon.

On the death of Girolamo III Luigi Durazzo, the palace was passed onto the hands of the Durazzo di Gabiano family, who decided to sell it to the Savoia family 15 years later.

King Carlo Felice di Savoia took over the Royal Palace and turned it into the official
summer residence of the family.

In this historical period some rooms were transformed, including the rooms of the Throne and Audiences, the ballroom and the apartments on the first floor.

A bridge was also built over the current via Gramsci connecting the Palace to the Port.

With the transfer of the capital of Italy to Rome, the Palace was used less and less by the Savoy family, who then decided to sell it to the State.

During the Second World War, the palace was bombed and damaged; after the war, the restoration was completed and the bridge demolished during the elevated road in 1964.

The interior style of the Palace is truly varied and follows the styles of different eras: the construction took place in the Baroque era, was then reworked into neoclassical art by the Durazzo family and finally completed by the Savoys in 1823. 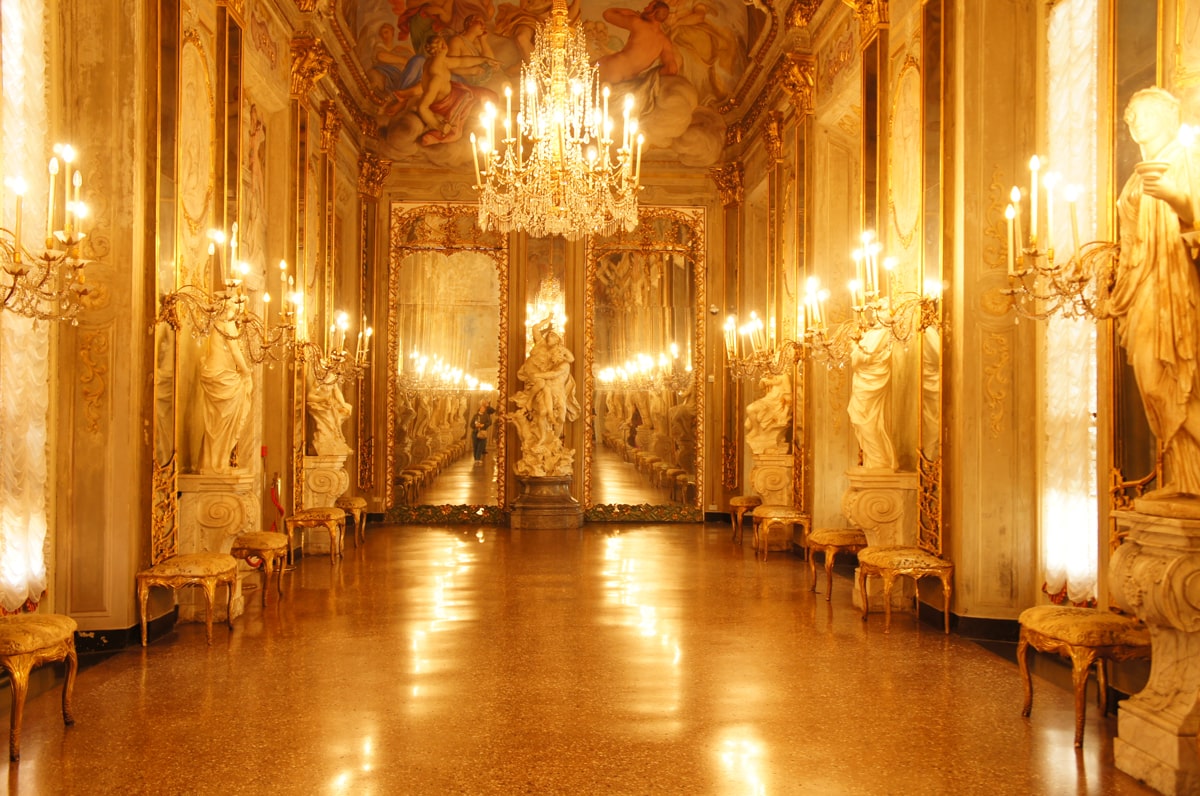 Precisely for this reason, the rooms are very different from each other, a feature that makes the Palace a unique attraction.

Let’s discover the most important rooms, all located on the second floor, opened to the public in 1922.

On the second floor there is the Sala delle Battaglie, decorated with giant paintings of the early eighteenth century, depicting naval battles.

Inside the Hall of Time there is:

▪ A portrait depicting la Verità Svelata dal Tempo, painted by Domenico Parodi in the early eighteenth century.
▪ 23 paintings set with harmonious symmetry, including the works of Tintoretto and Bassano.

After the Hall of Peace you will find the Hall of Veronese, which houses a magnificent painting of the Supper of Christ in the house of Simon the Pharisee.

The canvas is a seventeenth-century reproduction, as, at the behest of Carlo Alberto, the original was transferred to the Savoy Gallery of the Royal Palace in Turin.

This is the most famous room of the whole Palace.

The Mirrors Gallery is an interpretation by Domenico Parodi of the Versailles Ice Gallery commissioned by Gerolamo II Durazzo.

The enchanting setting was used in the past as a representative dining room for important occasions, including the visit of Emperor Joseph II of Austria and Napoleon Bonaparte in 1805.

The Chapel Gallery is dedicated to the Passion of Christ, and contains a magnificent Christ at the Column, by Filippo Parodi.

The other rooms in the Royal Palace are:

Garden of the Royal Palace

Leaving the Palace you will find yourself in front of a beautiful hanging garden from which you can see the old port and the historic center of Genoa.

It was built in the early eighteenth century by Carlo Fontana.

At the center of the garden there is an octagonal-shaped lake with a surrounding paving of black and white pebbles (colors of the ancient Genoese lordship).

These pebbles were recovered from the courtyard of the monastery of the Turchine on the slopes of Castelletto in 1739, and form compositions representing daily characters (a miller, a shepherd) or mythological (hippocampus, solar phoenix, centaur).

Where is it located?

The Royal Palace (Palazzo Reale) is located in via Balbi, in the historical center of Genoa.

Easily reachable both on foot and by car, let’s take a look at how to reach the Royal Palace. 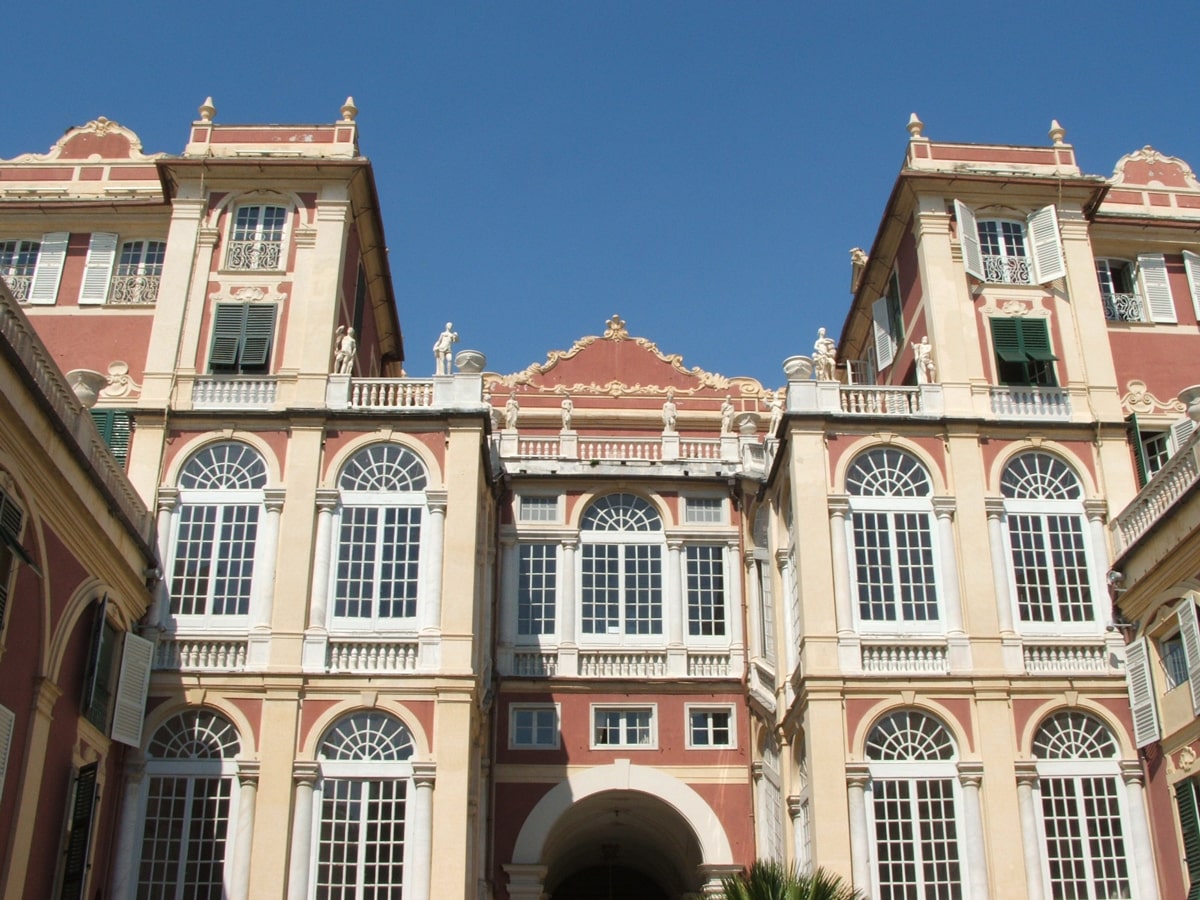 Royal Palace: how to get there

You’re traveling by car? By train? On foot?

Here’s all the useful information on how to get to the Royal Palace.

If you arrive from the east, exit the motorway at Genova ovest and head towards via Gramsci. I suggest you leave your car in the interchange car park located in Di Negro and proceed on foot for about 200 meters.

If you arrive from the west instead, exit at Genoa Airport and proceed in the direction of the center. Once you reach Via Gramsci, leave your car in the interchange car park in Di Negro and walk for a few minutes.

Once off the train, take via Balbi, after about 300 meters you will find the Royal Palace on your right.

If your train stops only at Genova Brignole (the other central station of Genova), you have two options:

1. Take the subway to Brin and get off at Darsena stop, then walk for 350 meters
2. Take bus number 20 and get off at the Balbi1/University stop, you will find the building on your left

Hotels near the Royal Palace (Genoa)


Are you planning a visit to Genoa and want to know what the best hotels or bed and breakfasts are, that are located in the area of the Royal Palace?

Here are my two tips.

Take a look at Genova Suite Art, a central, elegant and newly renovated bed and breakfast, located about 500 meters from the Royal Palace.

Do you prefer hotels to bed and breakfasts? No problem! Then I recommend the B&B Hotel in Genoa Principe

Here we are at the end of this long article on the Royal Palace of Genoa, in which I told you about its history, the rooms, the exhibitions and some useful information.

I’m going to hand it over to you now.

Have you ever been to the Royal Palace? What do you think?

0
Genoa is certainly one of the most fascinating Italian...
Read more
Attractions

0
If you are preparing for a trip to Genoa,...
Read more
Attractions

Boccadasse Genoa: What to See, Where to Eat and Sleep

0
A few steps from the center of Genoa, in...
Read more
Attractions

0
Are you visiting Genoa and want more information about...
Read more

Things to do in Genoa, Italy

Where to Stay in Genoa? Areas & Neighborhoods in Genoa, Italy

Getting to Genoa by Air & Getting from Airport to Downtown...

Genoa Beach: The 5 Most Beautiful Beaches Closest to Genoa Italy

Where to Park in Portofino, Italy? Map & List of Parking...

Best Things to Do in Portofino Italy in One Day |...