Doge’s Palace, Genoa: History, Exhibitions, Events, How to Get There

Are you planning a holiday in Genoa and want to know its most important attractions? Or are you looking for more information about the events and exhibitions of the famous Palazzo Ducale in Genoa?

Either way, you are in the right place.

I’m Andrea from Discover Genoa, and in this post I’ll talk about the Palazzo Ducale in Genoa, its exhibitions, upcoming events, its history, schedules and prices, as well as hotels and restaurants nearby.

Please read the article through to the end!

Located in the central square of the city, the Ducale Palace is one of the most important buildings of the Ligurian capital.

Built at the end of the thirteenth century following the victory of the Genoese against Pisa and Venice, the palace was abandoned until 1992, when, due to the upcoming the Expo, it saw its restoration completed and reached its maximum splendor.

Today it hosts important art exhibitions, debates and conferences and is one of the most beloved palaces by tourists from all over the world.

Let’s discover the history of the Palazzo Ducale in Genoa together.

The History of the Doge’s Palace

Let’s look back to 1284, the year in which the Republic of Genoa experienced the most fortunate and illustrious period in its history.

The Captains of the people Oberto Spinola and Corrado Doria had some palaces built in the center of the city, including the Doge’s Palace, seat of the first Genoese Doge, Simone Boccanegra.

In the centuries that followed, the Palace was progressively enlarged with the addition of new buildings, to close the square on which it faces on all four sides.

However, in 1977, a major fire damaged some parts of the Palace, whose reconstruction was entrusted to a famous architect at the time, Simone Cantoni. 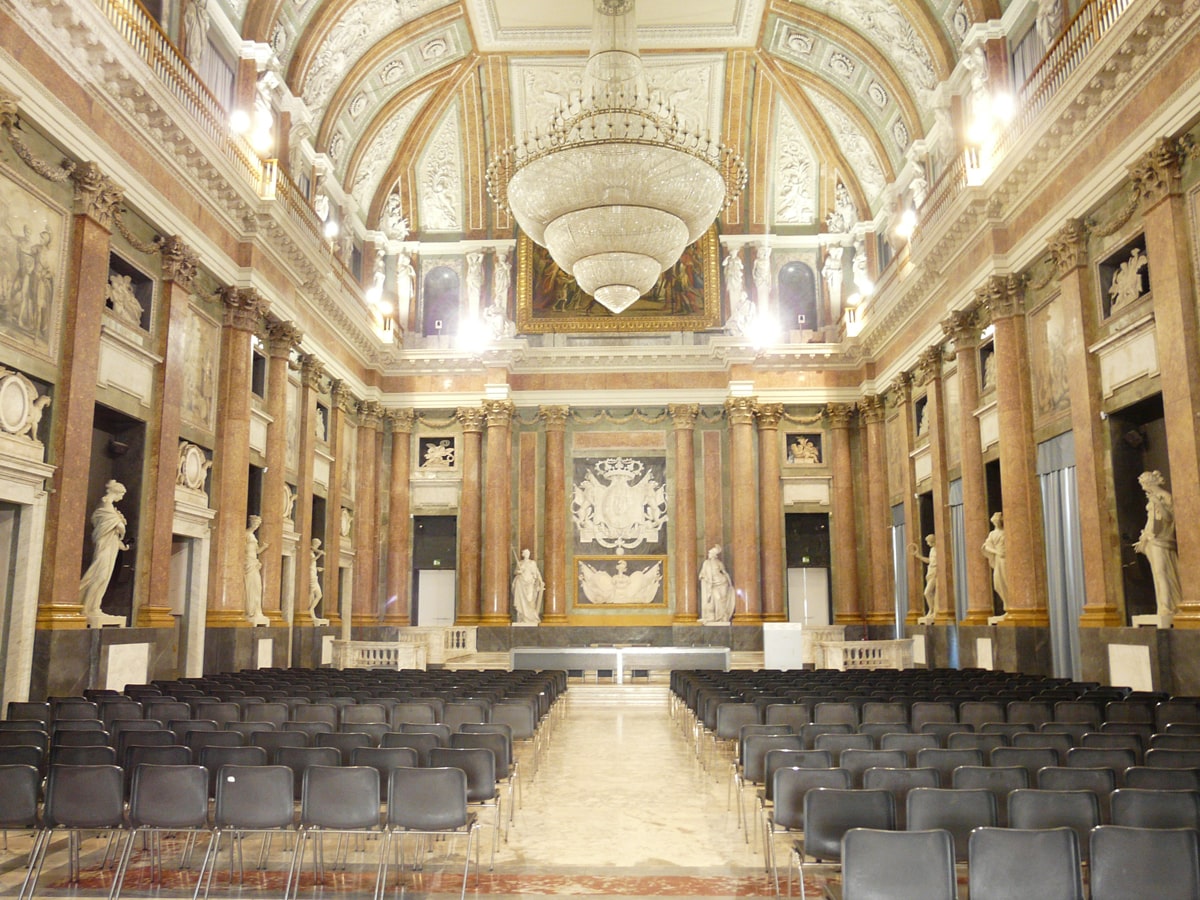 After being abandoned for a few years, the Palazzo Ducale was completely renovated and reopened to the public in 1992, on the occasion of the Colombiadi of Genoa.

Since then, the Palazzo Ducale has hosted important exhibitions and cultural events and has become a symbol of the city.

Enter and enjoy the majesty of the building, the contrast between medieval and sixteenth-century architecture, the Saloni del Maggior and Minor Consiglio, the paintings by Ratti and Orlando Grosso and the large “hanging road”, the spiral ramp built of a steel structure that runs from the ground floor to the terraces.

Here are two legendary stories about the Palace that have intrigued me and that I would like to share with you.

The enemies of the Republic facing the Doge’s Palace

Go to Piazza Matteotti and look at the facade of the Palace. You will notice eight statues of eight characters who calmly observe the people in the square.

But who do these statues represent so uniquely that nobody talks about them?

These are the eight most prominent enemies that Genoa won and imprisoned over the centuries.

The first on the right is the Saracen pirate Mugiahid, commonly called “Musetto”, who ruled a sort of personal kingdom in the Balearic Islands and in 1015 had attacked the city of Luni, but had been defeated, captured and deprived of family and money by the Genoese and Pisan army (who were then allies).

At his side stands Giacomo Marsano, Duke of Sessa, captured during a clash between the Genoese and Aragonese and imprisoned in 1435.

The third is the pirate Dragut, terror of the seas, a cunning and cruel character, who was captured by Giannettino Doria, who surprised him in the bay of Girolata where he felt safe.

The fourth on the right is Nicolò Pisani, a Pisan admiral in the service of Venice, who was
deceived and defeated by Pagano Doria in the Peloponnese in 1354.

Finally, we find Enrico d’Aragona (colleague of the Duke of Sessa in the defeat of Ponza), Alberto Morosini (the Venetian in the service of Pisa defeated in the battle of Meloria) and the King of Cyprus Giacomo Lusignano, who was imprisoned in Genoa for over ten years.

The death of Jacopo Ruffini, on the tower of the Palace

Friend of Mazzini, in the early nineteenth century, he joined a group of conspirators from the west of Liguria and decided to provoke an insurrection in Genoa and Alexandria.

But on the night of May 13th, 1833, Jacopo was arrested and locked up in the tower of the Palazzo Ducale (which served as a State prison), where he was interrogated and tortured for over a month.

On the night of June 18, the guardians of the tower found him lying on the ground lifeless, death by suicide.

Some hypothesized that he had committed suicide because he was afraid he would not be able to resist other tortures, but the thesis of suicide did not convince everyone.

Jacopo Ruffini was in fact the head of the conspirators, and the government feared that his hanging would make him a martyr, giving a further boost to the insurgency. 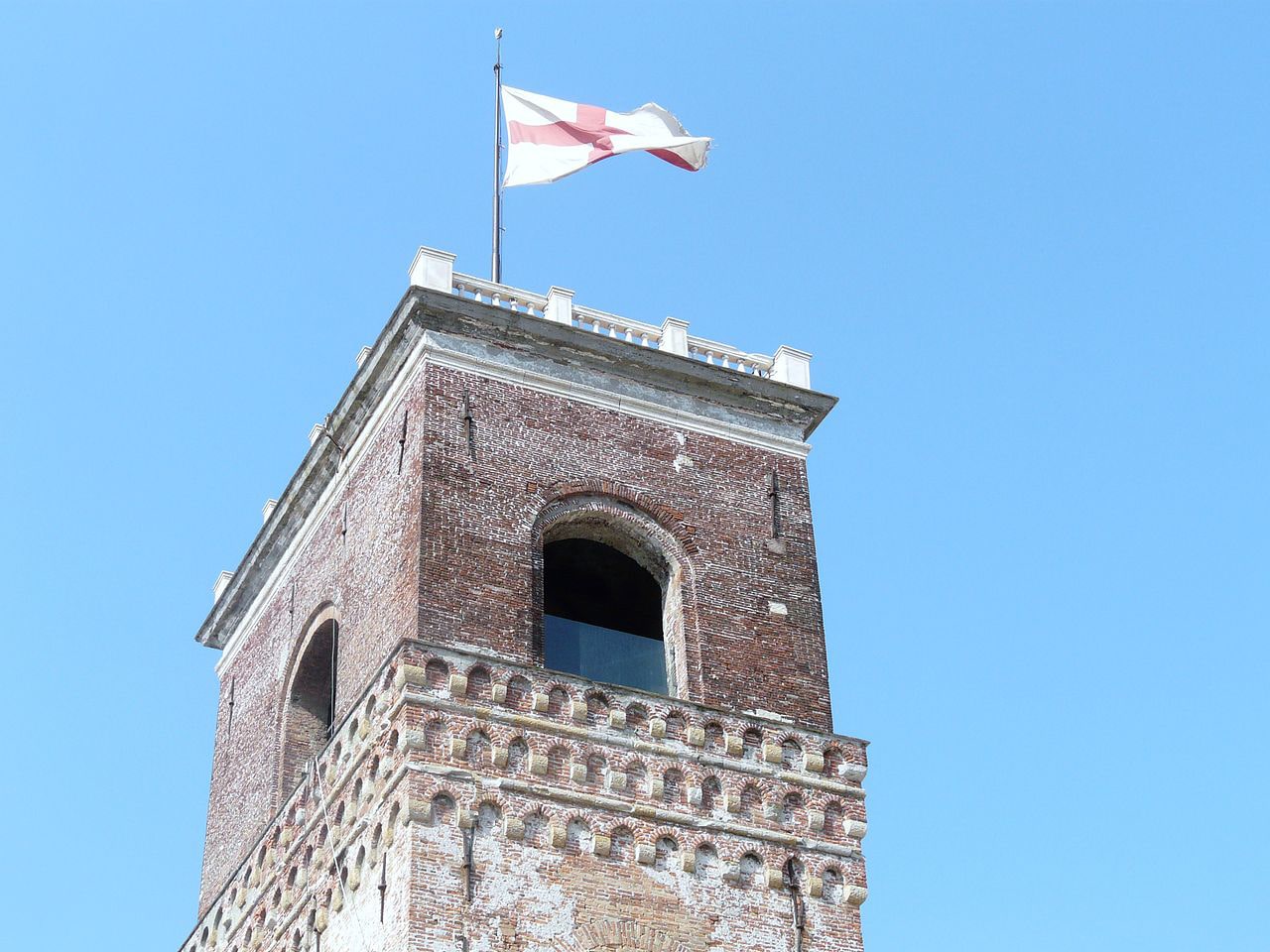 Suicide or murder, in the Grimaldina tower a plaque was placed in his memory that reads “I consecrated these prisons to the blood of Jacopo Ruffini, who died for the Italian faith in 1833”.

Enter the Doge’s Palace and ask to visit the Grimaldina tower. You can still see his inscriptions engraved on the walls of the cell.

Well, after reading the history of the Palace, I imagine you’re wondering: what are the exhibitions and events of the Doge’s Palace?

The exhibitions scheduled for the 2018/2019 season are as follows:

Palazzo Ducale is not only synonymous with exhibitions; here you can participate in
events of all kinds, including open-air cinema or New Year’s Eve open air.

Mid-August at the Doge’s Palace?

Over the past years, on the occasion of August 15th, the Doge’s Palace has organized exhibitions at discounted prices.

For August 15th, 2019 nothing has been communicated yet, but we are waiting to learn about the initiatives of the Doge’s Palace.

If you want to spend the longest night of the year at the Doge’s Palace, here is the full program.

The evening is organized by Mentelocale Bistrot, in the prestigious setting of the Fondaco di Palazzo Ducale; here you can visit the New Year’s exhibitions and enjoy a buffet aperitif and midnight toast with sparkling wine, panettone and mandarins.

A different way to spend a special New Year’s Eve.

How to get to Palazzo Ducale Genova

Are you going to come to Genoa and don’t know how to reach the Doge’s Palace?

In this paragraph you will find some useful information to get to the Palace by car or by
public transport.

How to reach Palazzo Ducale in Genova from the station

Brignole is one of the two central stations of Genoa and is about 1.3 km from the Palazzo Ducale.

To reach it, you can continue on foot through the most central streets of Genoa (via San Vincenzo and XX Settembre) or take the subway and get off at De Ferrari.

You’ll find the Palace right in front of you.

Genoa Piazza Principe is about 1.6 km away.

From here you can go on foot, passing through the beautiful via Balbi, Piazza dell’Annunziata, via Cairoli and Garibaldi, or use the public transport provided by the City of Genoa.

In this case, get on the subway at Principe and get off at De Ferrari; you’ll find the Palace right in front of you.

How to get there by car

Are you traveling by car and want to know how to reach the Palace without entering the Limited Stop Areas (ZTL)?

Well, you should know that the Ducale Palace is located right in the center of the city, and the neighboring areas are almost all inaccessible to vehicular traffic (if you do not have a special permit).

For this reason, I suggest you leave your car in a toll parking lot located near the center, let’s that a look at which are the closest.

If you’re looking for a paid parking space, you can opt for:

Parking on the road:

To learn more, read my article on where to park in Genoa.

Are you looking for the best hotel or bed and breakfast located near the Palazzo Ducale and the central square of Genoa?

These are my three tips:

Al Centro di Genova is a B&B located about 400 meters from the Palazzo Ducale.

It is a private structure composed of two double bedrooms, a bathroom and a sofa bed in the living room: ideal for groups of friends or families of 3-4 or 5 people.

If there is no availability or you prefer to book elsewhere, take a look at Genova Suite Art, a central, elegant and newly renovated bed and breakfast, located about 400 meters from the Doge’s Palace.

Do you prefer hotels over bed and breakfasts? No problem! Then I recommend the Best Western Hotel Metropoli, a three-star hotel located about 200 meters from the Doge’s Palace.

Now let’s move on to some practical information: let’s find out the timetables of the palace and of the visits together, as well as the ticket office, the prices and the restaurants located inside the palace.

Well, we have come to the end of this long article on the Doge’s Palace, in which we discovered which are the most important exhibitions and events, the hotels and parking lots in the area and directions on how to get there.

Leave a comment below. I will read and respond to all comments.

0
Genoa is certainly one of the most fascinating Italian...
Read more
Attractions

0
If you are preparing for a trip to Genoa,...
Read more
Attractions

Boccadasse Genoa: What to See, Where to Eat and Sleep

0
A few steps from the center of Genoa, in...
Read more
Attractions

0
Are you visiting Genoa and want more information about...
Read more

Things to do in Genoa, Italy

Where to Stay in Genoa? Areas & Neighborhoods in Genoa, Italy

Getting to Genoa by Air & Getting from Airport to Downtown...

Genoa Beach: The 5 Most Beautiful Beaches Closest to Genoa Italy

Where to Park in Portofino, Italy? Map & List of Parking...

Best Things to Do in Portofino Italy in One Day |...